SPG Hot Escapes released its weekly deals today for hotel discounts over the next six weeks and it is heavy on USA hotels this week. Washington D.C. has some deals like Westin Georgetown for $98 this Friday, July 10 and $128 on Saturday night. That is a great deal for this hotel. The rate is $109 for Friday and Saturday August 7-8 for another low weekend price.

Sheraton Atlantic City is $87 per night Sunday and Monday July 26 and July 27.

Sheraton Atlanta Airport is $75 and $68 for Friday and Saturday nights on July 31-August 1. That hotel only gets a 3.5 out of 5 guest rating, so not so great for the actual hotel. I stayed there in 2007 and I was uninspired. But, inspiration is not really the point for the current stay when the reward is a free night at any Sheraton after 5 nights. I stayed in two airport Holiday Inn hotels in Dublin and London Gatwick last November on low weekend rates. I am writing this post sitting inside a lovely room at the InterContinental Park Lane, London on two free nights I earned from those two cheap hotel nights last November.

Sheraton Valley Forge, King of Prussia has $95 rates for two weekends on Fri-Sat July 31-Aug 1 and Aug 7-8. This hotel weekend getaway comes with history lesson opportunities for the family and perhaps a chance for your children to create their own history memories. That is what travel is about.

Sheraton Albuquerque Uptown is $75 per night August 14-16 and $98 per night for many dates over the next six weeks.

Sheraton Desert Oasis Villas in Scottsdale, Arizona is a place you can knock out five consecutive nights at $98 per night. Sure, it is hot as hell, but at least you know there will be a working air conditioner. This week in Europe has topped 100 F in many places like Frankfurt, Germany. We roasted in Copenhagen with temperatures in the 90s and a hotel AC system not accustomed to those kinds of temperatures.

One of the nicest Starwood Hotel stays we had was during one of the Netherlands deadliest heat waves in July 2006 when we stayed at Hotel Des Indes in The Hague and it was over 100 F. We lounged under the umbrella of our large patio deck and stayed cool at the small indoor swimming pool with the wave function turned on that sent us spinning around the pool. It was one of those pool wave exercise functions to make it possible to swim against the current in a small space. When you don’t swim, the current spins you around the pool. We had a blast at Hotel Des Indes. Too bad some people in the Netherlands were dying from heat stroke that summer. 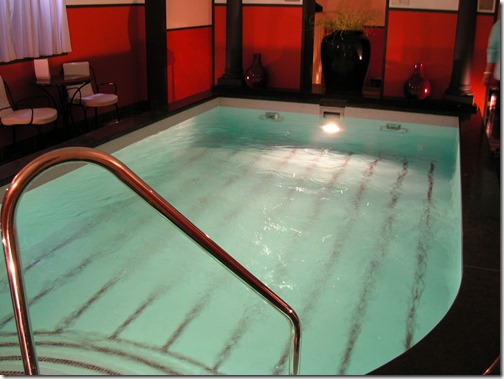